Design and function of muscular systems for locomotion and sound production

The general goal of my research program is to answer basic questions about the design of muscle and its function during locomotion and sound production. In addition, my research focuses on the effect of temperature on motor performance.

This research has required both integrative and comparative approaches. The integrative approach has required us to obtain information at different levels of organization from molecular biophysics to whole-animal biomechanics. This is necessary because: 1) one cannot understand how a muscle is designed without knowing exactly what it does during normal behavior and 2) the adaptation of muscle for different motor activities takes place at the molecular level.

This integrative approach requires measurements at all levels of organization and hence an animal model where all these measurements can be performed. Fish have led the way in this regard. In contrast to the mixing of different fiber types such as occurs in the muscles of mammals and most other vertebrates, the different muscle fiber types in fish are organized into large, homogenous, and anatomically separated regions, that are visible to the naked eye. In fish, as opposed to mammals, we can monitor which motor activities are powered by each fiber type because we can implant electromyography electrodes in these anatomically separate regions. In addition, one can dissect bundles of fibers, that are all of the same type, so that the mechanical, biochemical and ultrastructural properties of each muscle fiber type can be determined. We have also concentrated on frogs, because although their different fiber types are not separated as in fish, it turns out that the large extensor muscles used in jumping are almost pure in fiber type.

Using swimming fish and jumping frog, we have been able to elucidate 2 rules of muscle design. First, myofilament length and fiber orientation in the animals seem to be set so that active muscle fibers always operate on the optimal part of the sarcomere length-tension curve, and second, the maximum velocity of shortening of the muscles (Vmax) and the gear ratio of the fibers are set so no matter how fast an animal moves the active fibers will operate at a V/Vmax (where V is the velocity at which the fibers shorten) of about 0.2 to 0.4 where maximum power is generated with optimal efficiency. Given these constraints, to achieve a full repertoire of movement, animals must have different fiber types with different Vmax's, so that a wide range of V's can be attained. 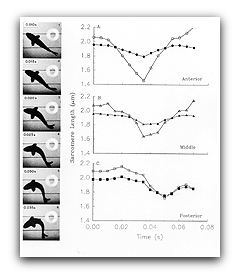 The process of activation and relaxation (i.e., turning muscle off and on, respectively) can greatly effect the power muscle generates during locomotion. To obtain critical information, we determined the length changes and stimulation pattern the muscles undergo during locomotion, and then imposed these conditions on isolated muscle and measure the resulting force and power production. 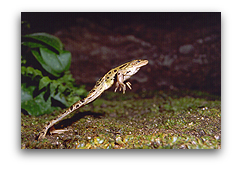 We found that in fish, relaxation rate is set to be relatively slow and hence the muscle is actually in the process of relaxing during the power stroke so that it can be subsequently relengthened without resistance. By contrast, in the one-shot jump of the frog, the muscle remains maximally activated throughout the jump so it can produce maximum power.

Up to now we have approached muscle design in a fairly phenomenological manner, but over the last 4 or 5 years my laboratory has been using biophysical approaches to better understand how modifications are made at the molecular level for different functions.

We have used toadfish Opsanus tau as an experimental model because they contain the greatest range of contractile properties of any vertebrate. These animals rest on the bottom and wait for a fish or crustacean to pass; then they grab the prey with their immense jaws. Toadfish’s swimming muscles reflect this sluggish behavior. Their slow twitch red muscle, which in most fish are used for steady swimming, are almost non-existent; the few that do occur are among the slowest ever measured–they work at ~1 Hz. Toadfish "fast"-twitch white muscle, used in a short burst of activity to capture prey, are also unimpressive– they have about the same speed as slow-twitch muscle in other fish. 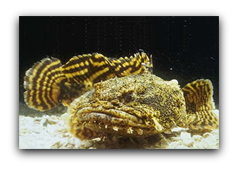 But when it comes to calling for a mate, the male toadfish is an athlete of Olympic stature. The muscles that surround his heart-shaped swimbladder, alternately contract down on the organ and relax at up to 200 hertz to produce the "boat-whistle" mating call. In fact, the swimbladder muscle is the fastest vertebrate muscle known. 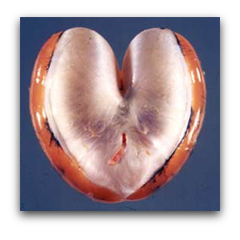 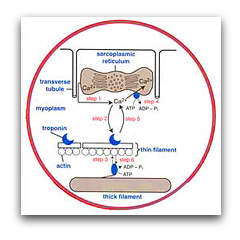 The diversity of muscles in toadfish strikingly illustrate how muscle can be so exquisitely tuned for one behavior, that it can’t be used for another. Neither the red nor white swimming muscles can physically produce high frequency sounds because they can't relax fast enough. By contrast, at the low frequencies of steady swimming, the swimbladder muscle’s extremely low mechanical power output make it unable to power locomotion.

As we examine the biophysics of the muscle in more detail, we are also studying the fish’s behavior. During our summer research in Woods Hole, we go into the field with a boat, and record the calls of toadfish with a hydrophone. Our goal is to understand how the fish produce the calls—all the way from muscle biophysics to the whole animal.

scaling of muscle mechanics and energetics with body size in mammals

The high cost of locomotion in small mammals has been attributed to fibers from small animals using more ATP to generate force than fibers from large animals. To test this hypothesis, we have developed a quantitative realtime fluorescently coupled assay to measure ATP utilization by single skinned fibers during contraction and we have used this to determine the energetic cost of muscle contraction from animals of different body sizes.

The ultimate goal of our approach is to integrate muscle function from the molecular to the whole animal level. Although we can make molecular biophysical measurements and whole animal measurements, there is still a significant obstacle to integrating from muscle to locomotion. The musculo-skeletal system of any animal is extremely complex. For instance in our previous studies of frog jumping, we related the results from one muscle to movement of the whole frog. But frog hindlimbs have in excess of 15 muscles which may be performing different types of contractions. Musculo-skeletal modeling, however, can be an enormous help in keeping track of forces and torques generated by many muscles simultaneously.

Our first step in developing a virtual frog model was to disarticulate the bones and scan them with a 3-D laser scanner into a computer. The next step was to determine the origins, insertions, and tracks of the muscles which are represented by red lines. In addition, we measured the anatomical properties of the muscle: their mass, angle of pinnation, fiber length, sarcomere length etc. We also divided the frog into a number of segments and determined the masses and moments of inertia. Further the joints were defined, and the contractile properties of the muscles were input into the model:

The last step was to run a forward dynamic simulation. This involves turning on the muscles with the same time course found in vivo. The muscles generate force and accelerates the frog into a jumping movement. It is important to point out that this is not an animation–rather the movement is due to generation of virtual forces and virtual torques accelerating the frog’s body.

The model will become most exciting, when we can couple it with a molecular model of muscle contraction. We should then be able to answer "what if" questions–such as how would frog jumping performance be altered if the crossbridge kinetics were changed in a specific manner. This would give us terrific opportunity to test our understanding of the muscular system. In addition, this virtual frog will be a great discovery learning tool for physiology and bioengineering students. The students will be able to modify any parameter (cross-bridge kinetics, muscle mass, angle of pinnation, point of attachment) and see how this will effect whole animal movement.

Because of his expertise in fish muscle and fish swimming, and the Navy's long-term desire to build submersible vehicles which maneuver like fish, Dr. Rome was already in discussions with the Office of Naval Research when in late 2002 they made an unusual request: could he come up with a way to generate electricity from normal human movement? This lay outside of his usual research area, yet the problem was compelling--Special Forces in Afghanistan had to carry twenty pounds of batteries in addition to their 80 lb backpacks to power their GPS, communication equipment and night vision devices, and so generating electricity could greatly reduce this burden. Dr Rome invented the Electricity-generating Suspended-Load Backpack which can generate 1000-fold greater electricity than previous devices (20-40 Watts compared to 20 milliwatts). In Rome's backpack, the load is suspended by springs, and as one walks the load moves up and down with respect to the frame. This movement is used to turn the generator and produce electrical power.

While doing this study Rome observed that this movement also provides an added ergonomic benefit: it reduces the peak forces on the body. If one wears a 50-lb backpack, the static force exerted on the body is equal to 50 lbs, however during walking or running the peak vertical forces acting on the body increase due to the necessary vertical acceleration of the added mass. During fast walking, the peak increases by 70% (e.g., to 85 lb); and during running, it triples to a 150 lbs (Fig 2). Rome invented the Suspended-load ergonomic backpack which greatly reduces the vertical movement of the load with respect to the ground. This in turn reduces the accelerative forces on the body by 82% during walking and 86% during running (Fig 2). Reducing accelerative forces reduces metabolic cost by 40 Watts and increased endurance, or alternately, it permits the carriage of 12 extra lbs for the same metabolic cost (i.e., for free.). Further, it permits running with heavy loads while avoiding orthopedic injury. This ability, as well as electricity-generation, are crucial in many military, emergency/disaster relief and humanitarian missions.

Four US patents have been issued and foreign patents are pending. The development and commercialization of the packs has been moved to a small company, Lightning Packs LLC.

Rome, L.C. The effect of temperature and thermal acclimation in muscle and swimming performance of fish. Philosophical Transactions of the Royal Society 2007; 362(1487):1995-2016.

toadfish and other superfast muscles (rattlesnakes and songbirds

C. L. Harwood, I S. Young, B, Tikunov, S. Hollingworth, S. Baylor and L. Rome. Paying the Piper: The cost of Ca2+ pumping during the mating call of toadfish. Journal of Physiology, 2011 (In Press)

© 2021 The Trustees of the University of Pennsylvania
Penn Weblogin