Work in our laboratory uses songbirds to study the neural bases of vocal production and sensorimotor integration. Birdsong is one of the most tractable model systems for the study of complex learned behaviors. Much of the strength of the system lies in the ease with which the behavior can be quantified and the prominence of the highly specialized circuit, known as the song system, that is involved in song learning and production. 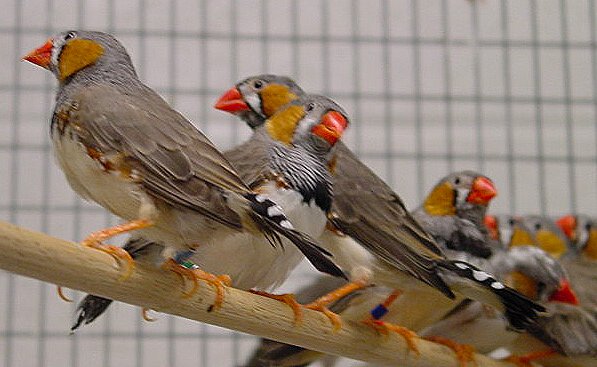 In addition, because song learning in birds and language acquisition in humans are both dependent on auditory feedback, the study of birdsong learning is likely to provide many insights into the mechanisms underlying vocal development in humans. [Click here for an article highlighting work on the neural bases of birdsong]

Our work is divided into three main areas of investigation.

1. The "respiratory-thalamic" pathway and its role in motor sequencing and hemispheric coordination

The primary objective of this work is to use the highly stereotyped zebra finch (Figure 1) song to investigate how the brainstem might shape the generation of higher-order motor commands. In songbirds, the respiratory brainstem (RAm & PAm in figure 2), which shares many anatomical and functional characteristics with its mammalian counterpart (McLean et al., 2013), also contains a distinct population of neurons that is functionally connected, via a thalamic intermediary (Uva in figure 2), to vocal motor “cortex” (HVC & NIf in figure 2). This work tests the hypothesis that the “respiratory-thalamic” pathway sends precisely timed signals that directly shape the timing of the circuits that encode the moment-to-moment motor commands for song (Schmidt, McLean & Goller, 2011; Ashmore et al. 2008). Because this projection is bilateral in nature, we are also interested in the role of this pathway in synchronizing motor commands across hemispheres. 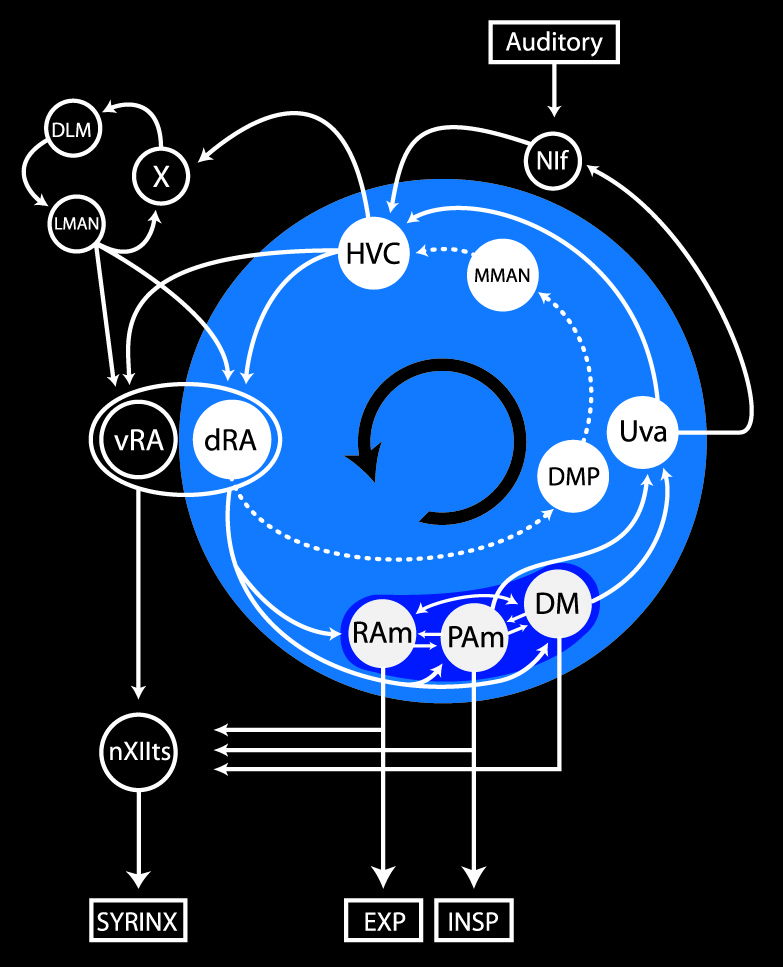 Because the corpus callosum is absent in birds, as it is in all non-mammalian vertebrates, this work directly addresses mechanisms of hemispheric coordination that occur in the absence of this major commissural system. We use neural recording methods (single and multi-unit) in anesthetized and awake birds to investigate the nature of the signal carried by the “respiratory-thalamic” pathway during song production. These measurements are coupled with detailed quantitative analysis of song acoustic and temporal features.

This work is a primary research focus of the laboratory.

Recent work in the lab (Lewandowski and Schmidt, 2011) observed pesisten fast gamma oscillations (90 - 150 Hz) of local field potentials and of single neuron firing following song production in a forebrain sensorimotor nucleus, nucleus Interface (NIf) in songbirds. These oscillations appear after singing has ended and accompany a rebound of spiking activity. They persist for up to 30 seconds following singing thereby outlasting teh event (song) thattriggered them by over an order of magnitude. NIf is at the top of the ascending auditory pathway, and provides input to the nucleus HVC, which is a key driver of song production. Therefore, NIf is ideally suited to link high sensory and motor pathways during song production and/or during replay during rest or sleep. It remains completely unknown how a nuclear structure can generate fast gamma oscillations and how these oscillations can persist for so long. This interdisciplinary project combines theoretical and experimental approaches. A modeling component (Hansel/Leblois Labs, Universite Paris Descartes, France) will determine the minimal neural network sufficient to drive fast and persistent gamma oscillations with spatiotemporal features consistent with available data. An in vitro component (Perkel Lab, University of Washington) will determine neuronal, synaptic and network properties in NIf. The in vivo component of the project will be performed in our lab where we will determine the source of the gamma oscillations and the mechanism(s) underlying their persistence.

3. Neural bases of song preference and reproductive behavior in a female songbird

For many decades, neuroscientists and evolutionary biologists have been interested in the mechanics and function of the songbirds’ song system: the interconnected neural circuit that connects the auditory forebrain with the brainstem via song-specific control nuclei. This work has predominantly focused on how the song system allows male songbirds to learn and produce song. The role of the song system in female songbirds, however, has been largely ignored. Rather than acting as a circuit that generates vocal behavior, some evidence suggests that the song system in females serves to organize preferences for males’ songs and guides their behavioral reactions to song in the form of a copulation solicitation display (CSD), that ensures survival of the species. Female brown-headed cowbirds show great selectivity in producing this behavior in reaction to variants of male song and disruption to the song system (nucleus HVC) eliminates this selectivity. 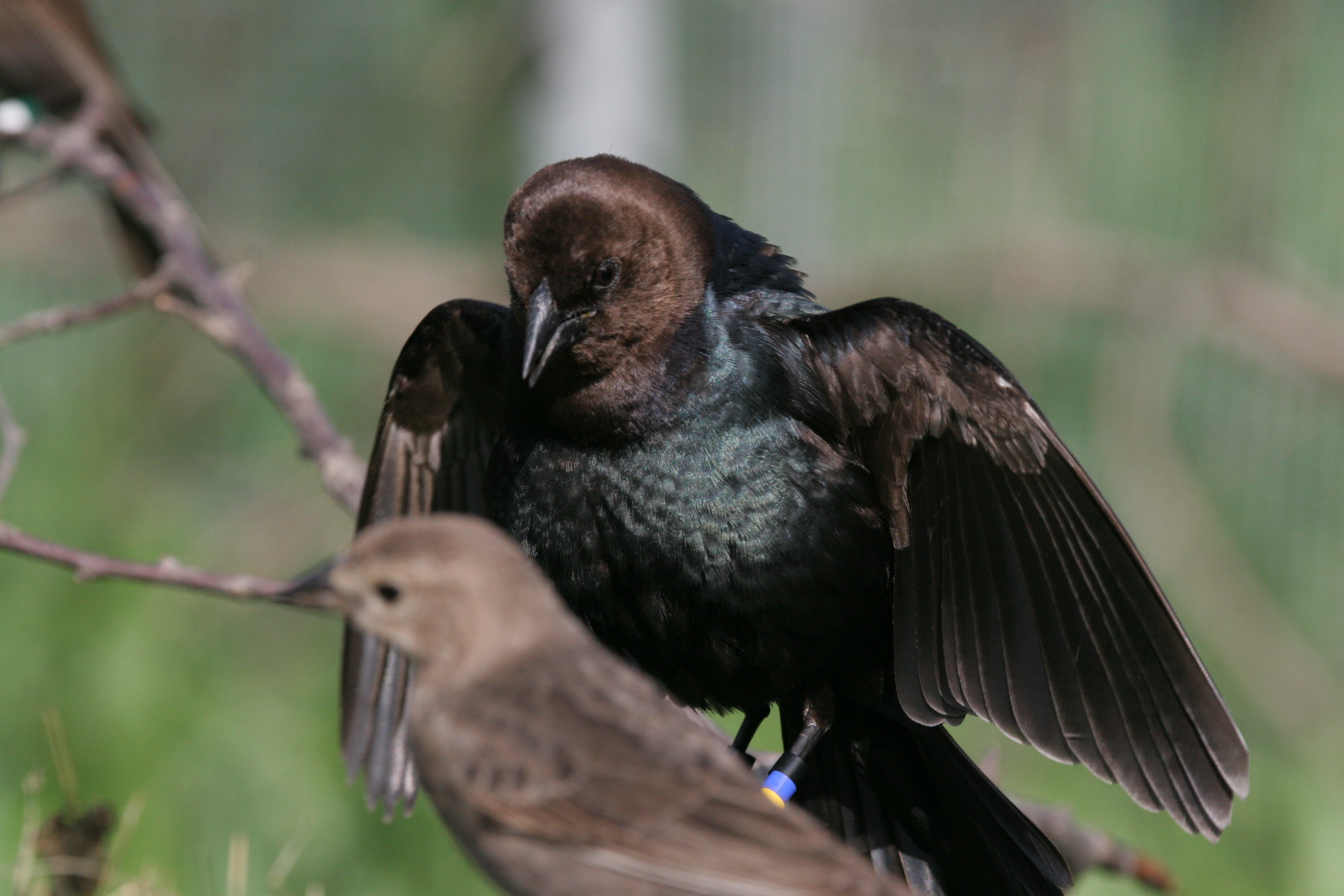 Capitalizing on the robustness of the behavior, its selectivity and its social malleability, the aim of this work is investigate how the song system transforms a sensory stimulus (the song) into a motor command that controls a postural (CSD) response. This work is relatively new direction for the laboratory that started out as a collaboration between my laboratory and David White's laboratory (See Maguire, Schmidt and White, 2013). This work continues as a collaboration with David White (Wilfrid Laurier University, Canada).