From corals to humans, a shared trigger for sperm to get in motion

If sperm can’t swim, life can’t go on. And a new study suggests that when evolution hit upon an effective strategy for making sperm move, it stuck with it.

A molecular pathway governing sperm motility is shared between corals, sea urchins, and even humans, according to research by a team from Penn’s School of Arts & Sciences. The mechanism is regulated by a pH sensor that signals when sperm are to begin swimming. The work, led by Kelsey Speer, a postdoctoral researcher in the lab of Katie Barott in the Department of Biology, appears in the journal Proceedings of the National Academy of Sciences.

Climate change, which is making the oceans more not only warmer but also more acidic, and localized disturbances, such as sedimentation, may threaten the process.

“When we started this project, nobody to our knowledge had looked at the mechanism that controlled coral sperm motility,” says Speer, the study’s first author. “We were really interested in what drives this process in the ocean, because that’s a part of their life cycle that is very vulnerable.”

“There’s so much diversity in sperm between species, so to find that this pathway was as conserved as it was, was surprising,” adds Barott, senior author on the paper. “I think this work highlights how important it is to regulate this function. Animals are dependent on these pathways functioning in order to make the next generation. If sperm don’t work, that’s the end.”

Sperm tend to be finicky and vulnerable, highly sensitive to their environment. Too warm? Males don’t produce sperm. Too acidic? Sperm don’t swim. Coral sperm have the odds stacked particularly tall against them. The hermaphroditic creatures only reproduce a few nights each year, timed with the new moon. They release both eggs and sperm into the open ocean, where sperm must swim through the water column, hoping for a fruitful match.

In contrast to coral sperm, which have been little studied, sea urchins serve as a model organism for studying sperm. But despite their appearance, sea urchins are much more closely related to humans than to coral, and the signalling cascade responsible for setting their sperm in motion is also highly similar to that of vertebrates. Thus the Penn team was curious to see how regulation of coral sperm motility compared.

They started with a clue that corals may possess a similar mechanism.

The Penn team labeled the enzyme sAC in sperm with a green fluorescent marker, enabling them to track its activity in the lab. The genetic sequence encoding sAC in coral bore many similarities to the equivalent enzyme in sea urchins as well as vertebrates. (Image: Courtesy of Kelsey Speer)

To find out, the researchers waited until one of those new-moon nights in Kaneohe Bay, Hawaii, to scoop up the egg-sperm bundles released by the coral Montipora capitata. Acting quickly, they took the sperm back to the lab, holding them in a sodium-free seawater. “What it does is it prevents all these signaling pathways from operating, so they’re frozen in an immobile state,” says Barott. “Then you can add a chemical to artificially raise their pH, and the sperm start swimming right away.”

Upon this activation, the researchers were able to monitor the activity of the enzyme of interest, soluble adenylyl cyclase (sAC) and cyclic AMP, the messenger molecule it produces, while also tracking how well the sperm were moving. Their experiments confirmed that sAC activity was required for sperm to swim; when the enzyme was blocked, the sperm flagella—the “tails”—moved weakly.

Comparing the genetic sequence of the M. capitata sAC to the sAC from a sea urchin species, Speer, Barott, and colleagues noted significant similarities, with about 50% of the sequence being the same overall, and identical sequences at key sites for the enzyme’s catalytic activity.

“We looked at previously published datasets that catalog every mRNA that would become a protein in these cells, so we could get an idea of the molecular machinery in place to regulate sperm motility in these species,” says Barott.

Interestingly, M. capitata contained multiple different forms of sAC, some of which more closely resembled versions present in mammals. In follow-up work, the team hopes to explore how these different forms are operating in the corals, as well as in other model marine organisms.

Looking at other molecular players in the sperm activation pathways initiated by sAC, the researchers found several shared by sea urchins as well as both other coral species, members of the Cnidarian phylum.

“If you’re thinking about the difference in the last common ancestor between humans and Cnidarians—that was a heck of a long time ago,” Speer says. “The fact that the core of this mechanism has been conserved between these two species is really neat. I think it speaks to the fact that it’s a really good system, so nobody needed to replace it with something better.”

With a basic picture of coral sperm motility in place, Barott’s lab hopes to pursue additional experiments that get at the question of how changing environmental conditions could alter the organism’s reproductive success.

“Both us and colleagues who study this species of coral have seen huge differences in the amount of sperm become mobile from year to year, and it does look like climate change, especially heat stress, can play a big role in knocking down sperm motility,” Barott says. “Now that we have this toolkit, we can do these climate-change type of experiments and understand more about the dynamics of this pathway and how it changes in periods of stress.”

Katie L. Barott is an assistant professor in the University of Pennsylvania School of Arts & Sciences’ Department of Biology.

Kelsey F. Speer is a postdoctoral researcher in Penn’s School of Arts & Sciences’ Department of Biology.

Speer and Barott’s coauthors on the paper were Luella Allen-Waller of the Biology Graduate Group and Dana R. Novikov of the College of Arts and Sciences’ Class of 2021, both members of the Barott laboratory in the Department of Biology in Penn’s School of Arts & Sciences. 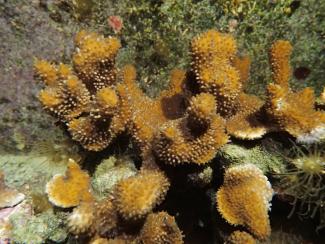