Careers in the Life Sciences Seminar

The Biology Graduate Program is proud to offer a seminar series about careers in the life sciences.  The goal of this seminar series is to provide information to students in the life sciences about the various career paths open to them  Seminars will be held once a semester with a variety of speakers providing advice and networking resources about different and unique career opportunities.

The first seminar was held on Friday, November 1, 2013, featuring Dr. Angela Bednarek, a 2002 alumna from the Biology Graduate Program of the University of Pennsylvania.  Dr. Bednarek now works in the Ocean Science Division of the Pew Charitable Trusts which supports scientific projects and fellowships that address key management challenges for the world's ocean ecosystems.  Dr. Bednarek focuses on creating effective science policy outreach strategies and assessing the impact of those strategies. 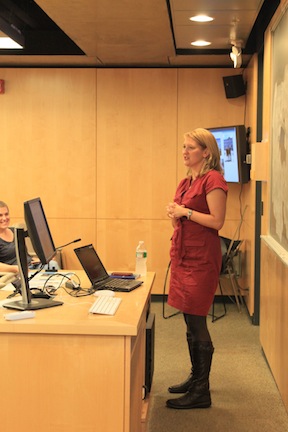 In her presentation, Dr. Bednarek described her trajectory from ecologist to science policy intermediary including her time as an AAAS Diplomacy Fellow at the US State Department in the Office of Environmental Policy.  Also included in this presentation was a discussion on how to lay the groundwork during graduate school for a career in science policy and the variety of oppotunities for pursing career paths in this arena. 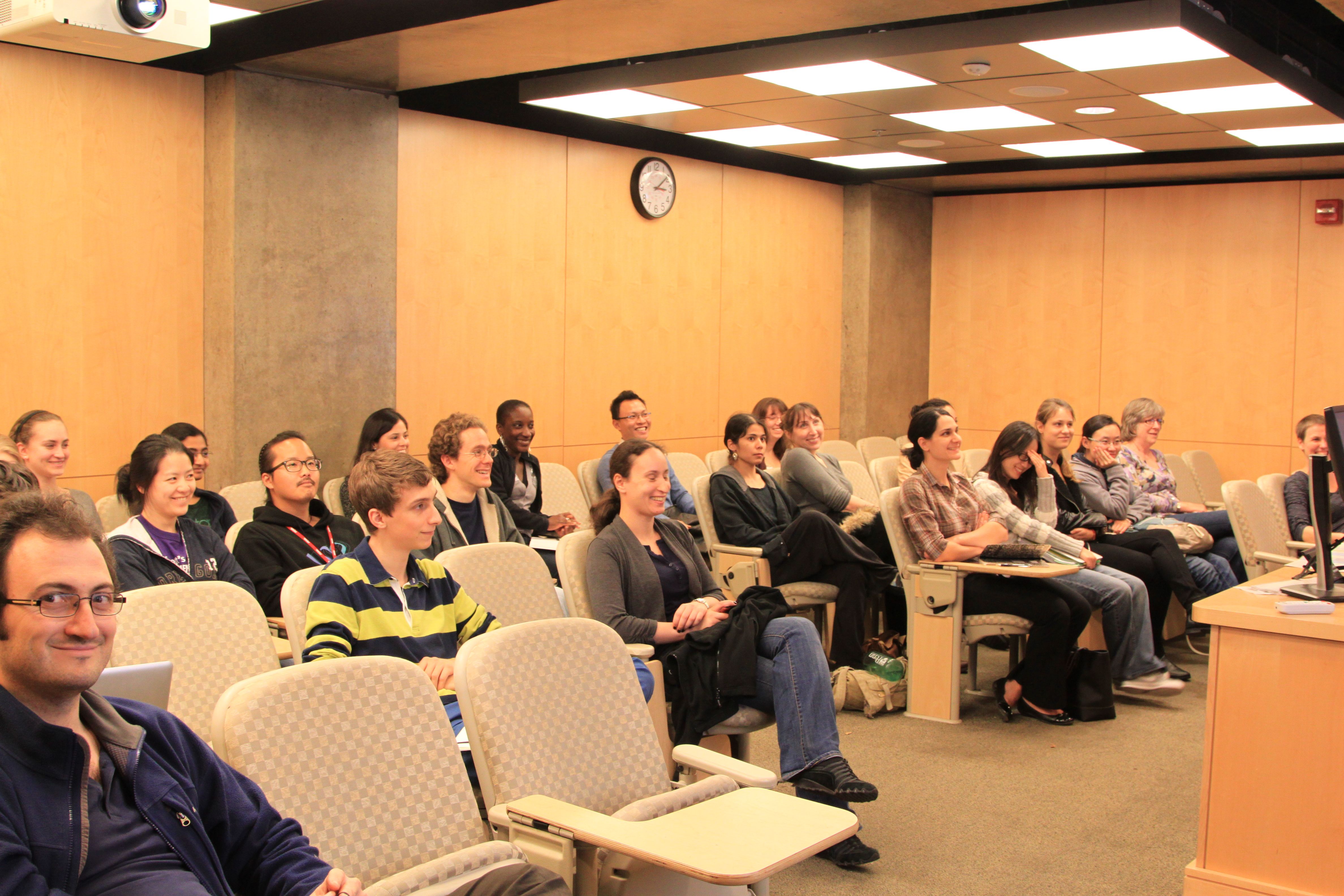 Dr. Angela Bednarek is pictured speaking to graduate students and post-docs at this inaugural seminar. 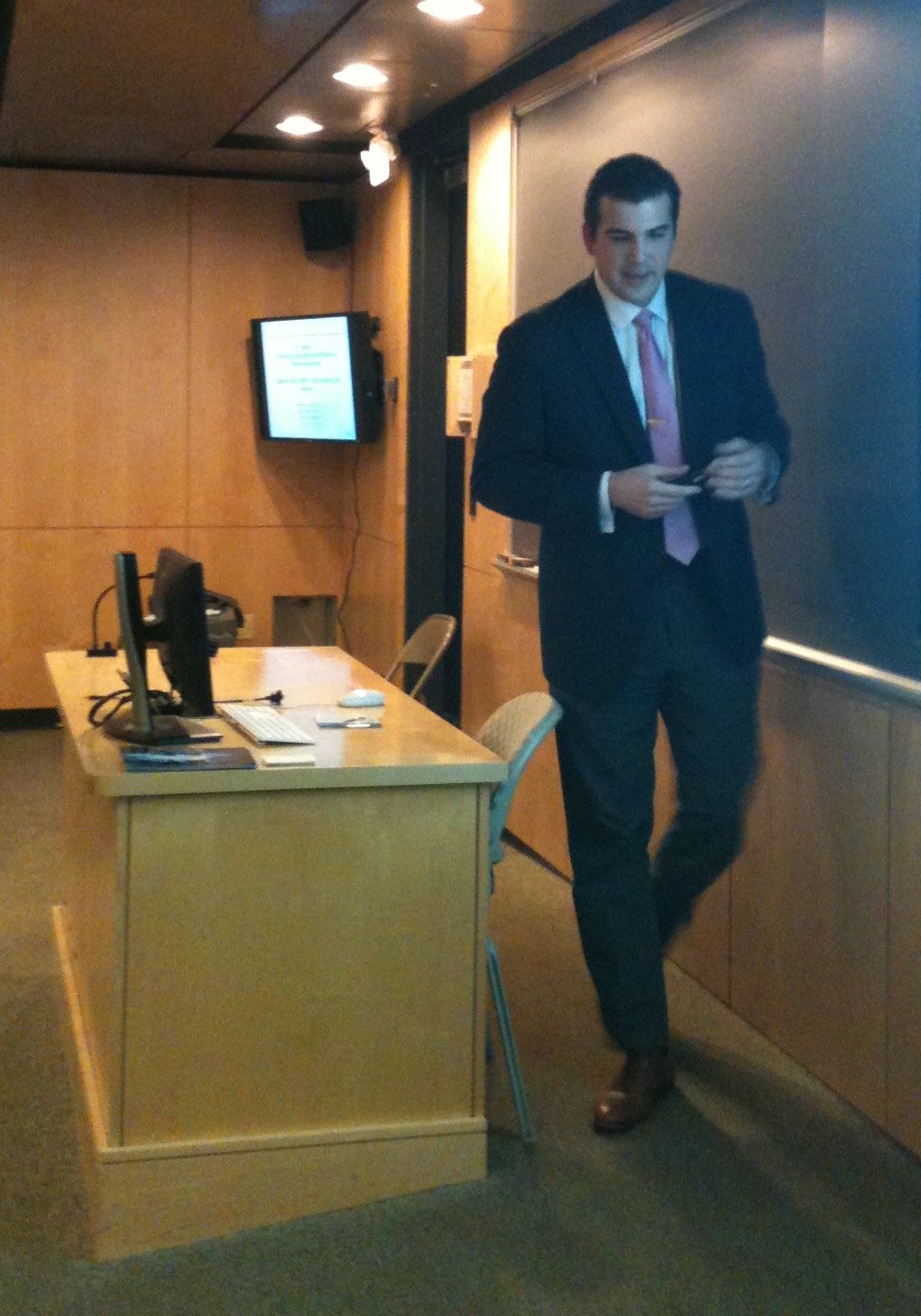 On March 7, 2014, Dr. Matthew Hoelzle spoke about his career as a Senior Medical Writer for Articulate Science, a company within the Nucleus Group.  The presentation was titled:  "A Career in Scientific Consulting and Medical Communications:  Leaving the Bench, but Keeping the Science."  In this presentation, Dr. Hoelzle described how consulting and communiation agencies interact with pharmaceutical companies in a variety of aspects, such as clinical trial design, data analysis and physician education.  He also discussed how his experience in academia provided a foundation for his career in industry. 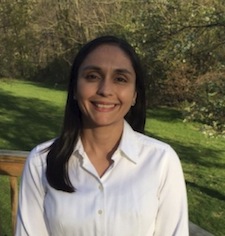 Dr. Elizabeth Methratta, a senior marine scientist from EA Engineering, Science and Technology, visit the Biology Department at Penn on May 2, 2014 to describe her work as a senior marine ecologist working at a Maryland-based ecological research and consulting firm.   In her position at EA Engineering, Dr. Methratta works to develop science-based decision support tools for natural resource management in the Chesapeake Bay and coastal mid-Atlantic region.  She has worked on topics such as native oyster restoration, food web modeling, and blue crab fishery dynamics.   Dr. Methratta discussed how the diverse skill set developed during graduate school can translate to a career in ecological research in the private sector. 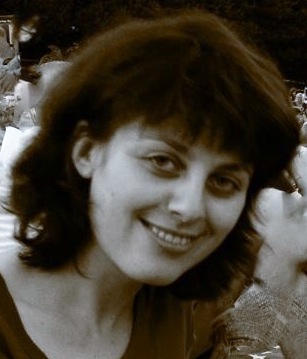 On October 24, 2014, Dr. Maria Rakhovskaya came to Penn to talk about her career in the US Department of State.  Dr. Rakhovskaya studied verdent monkeys in Puerto Rico for her dissertation, and she discussed the transition from field researcher to policy analyst working in the Federal Government.  In addition, the discussion included the ways that academic researchers can contribute to discussion of science policies.  Her current work involves climate change, health, governance, human rights, public-private partnerships and strategic planning.

On Tuesday, May 26, 2015, Drs. Lori Spindler and Karen Hogan took some time from their duties as instructors at Penn to discuss their journeys from graduation with their doctoral degree in Ecology to pursuing careers in undergraduate life science education.

Discussion included the skills that are needed to succeed in these types of positions, the benefits of pursuing non-traditional academic careers, and how to build networks if you are interested in pursuing a similar career path.

Dr. Claudia Perez-Ortega, a research scientist from DuPont Pioneer, visited the Biology Department at Penn on October 2, 2015.  Dr. Perez-Ortega described her experiences in making the transition from academia to pursuing a career in industry.  In her presentation, Dr. Perez-Ortega provided information on the tools and skills that helped her in making the decision for career changes and what is needed to become a research scientist in companies such as DuPont Pioneer.

On Friday, November 13, 2015, Dr. Jonathan Fisher discussed his research and teaching experiences following his graduation from Penn (PhD, ’07) that led him to join a new research Centre within Memorial University of Newfoundland, Canada.  Jonathan will discuss the opportunities and challenges of leading academic-industry research partnerships on the North Atlantic. 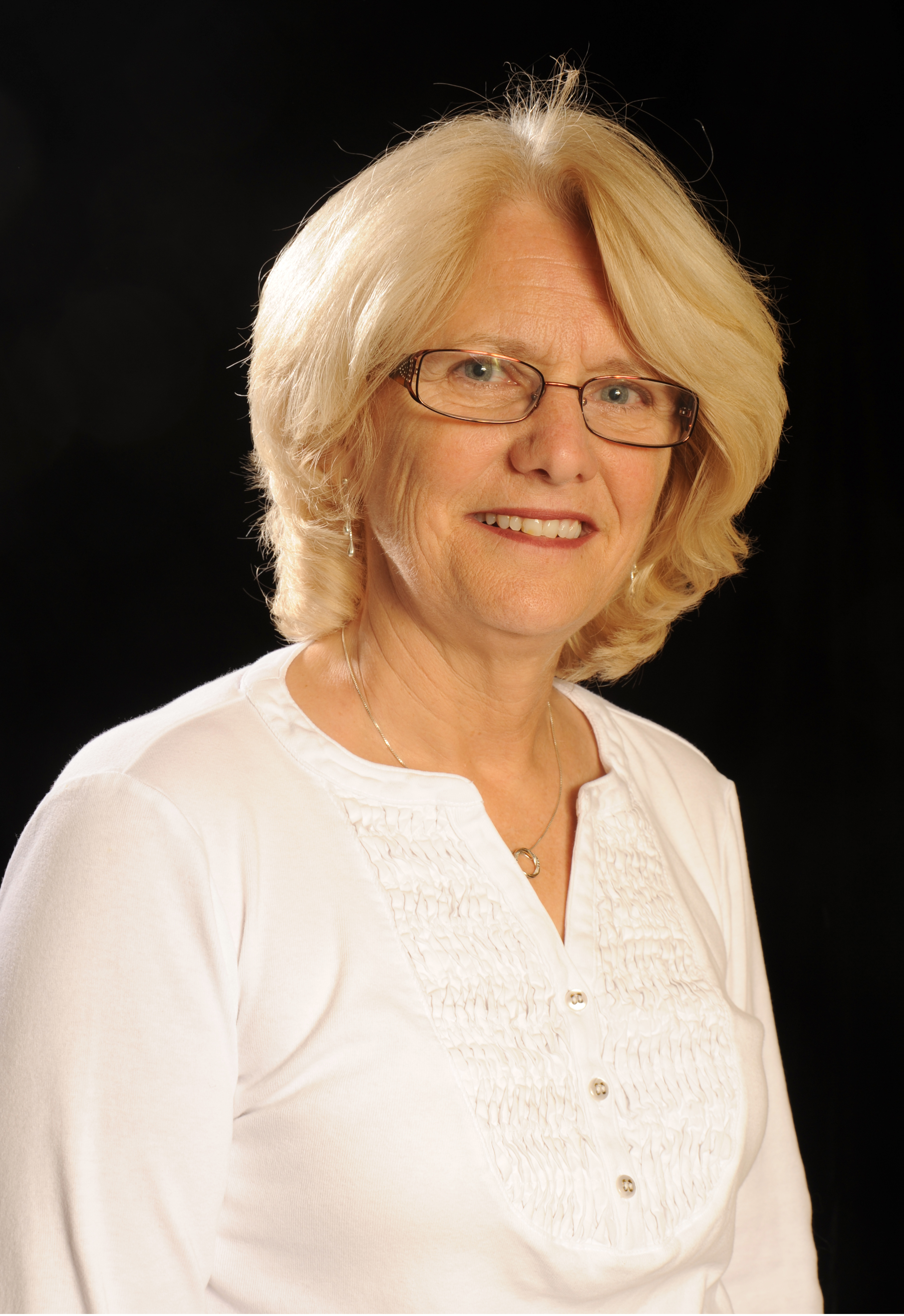 Carl Sagan Center for Study of Life in the Universe visited the Penn on March 18, 2016 to discuss career pathways in NASA and the SETI institute.  Dr. Race graduated from the University of Pennsylvania with a Bachelors of Arts in Biology and Masters of Science in Energy Management and Policy.   She received her Ph.D. from University of California at Berkeley.  In her wildest dreams, Dr Race states, that she would ever imagine that her career path would take her from coastal mudflats to water pollution to environmental management and into astrobiology and international science policy.   Through the years, Dr. Race was involved with teaching, research, journalism, resource management, and analysis projects in agriculture, genetic engineering, nuclear power ystems, biosafety, synthetics biology and bioethics. 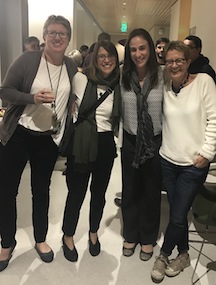 On November 18, 2016, Dr. Natalie Henkhaus gave a Careers in Life Sciences presentation.  As Executive Coordinator of the American Society of Plant Biologists and the Plant Science Research Network, Dr. Henkhaus discussed her work in science communication, science policy, and student development and training.  Her career has been focused on the inspiration of the next generation of researchers and scientists. 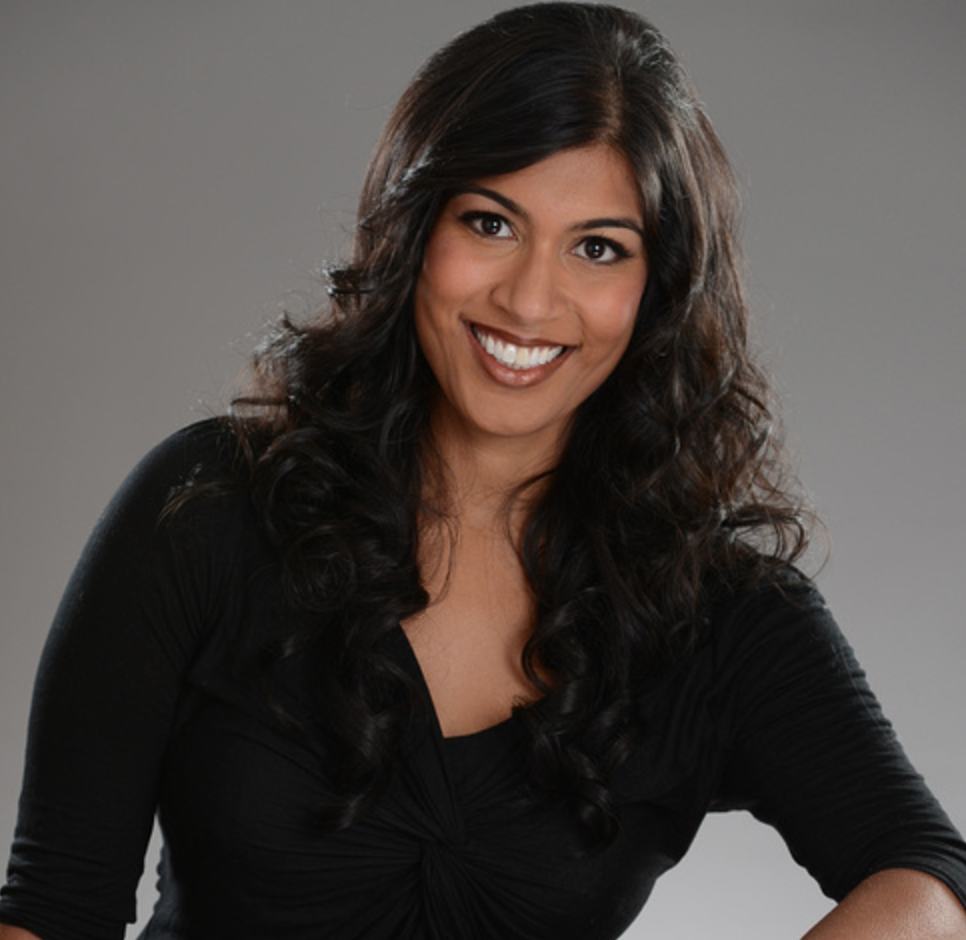 In March 2017, Dr. Ritika Chaturvedi of Rand Corporation provided the Biology Graduate Students with her perspective on her career as an engineer in the Rand Corporation.  Dr. Chaturvedi has a diverse background in engineering, science and technology, policy analysis, asset valuation, strategic consulting, and translational biomedical research.  She is interested in science and technology questions such as the utility, adoption, and broad effects of emerging disruptive technologies in health care and on society. Dr. Chaturvedia earned her doctoral degree in Bioengineering from Dr. Christopher Chen's Microfabrication Laboratory at the University of Pennsylvania.  Her research involved the organization of endothelial cells into defined networks within engineered tissue leads to the formation of templated, functional vessels that are connected to the host vasculature upon implantation.

© 2023 The Trustees of the University of Pennsylvania
Penn Weblogin